The “Day of the Open Monument” took place on September 11th and September 12th, 2021, to which the foundation “Künstlerhaus Maetzel” opened their just recently aquired monumental house and garden. The Light Trap, which the Künstlerhaus Maetzel describes as “installation and artistic-scientific happening broaching the topic of light pollution and insect protection”, was shown in the historic garden site of the Künstlerhaus. A week ahead of the opening, on September 6th, Nana Petzet, a team of entomologists and a documentary team illuminated the Light Trap for a so-called light evening. A mercury vapor lamp was placed at a location visually separated from the Light Trap by the villa for the purpose of comparison. For the first time, the Light Trap’s effect of insect attraction could be put in relation to the insect attraction of the mercury vapor lamp, which has been the standard illuminant in scientific light-trapping for five decades. A small number of invited guests took part in insect catching that evening and was able to listen to the expertise of the present entomologists on the specific species and how to recognize them.

Entomologist Timo Zeimet documented the data gathered on September 6th. The light evening took place from 8 o’clock in the evening until quarter past 11, while it was very cloudy and windstill. There was a temperature drop from 18 degrees Celsius to 13 degrees Celsius, whereas the humidity rose from 67% to 82%. All of these conditions applied to both the location of the Light Trap and the location of the vapor lamp because of the low spatial distance between each other. There were, however, several differences regarding the species and numbers of individuals that were sighted. Nana Petzet’s Light Trap enticed 9 different species and overall 23 individuals. In comparison, the mercury lamp only allured 6 species and 16 individuals. Two individuals of Campaea margaritaria, also commonly known as light emerald, were each found at the Light Trap and at the mercury lamp. Another species that found its way to both locations was Hypena proboscidalis (whose colloquial name is snout). A count of 11 individuals was documented for the Light Trap, wheras 9 were sighted at the mercury vapor lamp. Noctua pronuba (large yellow underwing) was the third and last species which visited both locations. Again, more individuals were sighted at the Light Trap, with 3 versus only 2 at the vapor lamp. The species exclusively documented by the entomologists stationed at the Light Trap were Watsonalla binaria (oak hook-tip), Dysstroma truncata (common marbled carpet), Phlogophora meticulosa (angle shades), Abrostola triplasia (dark spectacle), Mythimna l-album (L-album wainscot) and Colostygia pectinataria (green carpet). The latter having appeared twice, in contrast to the other just mentioned insects, of which only a single individual each was found. Similarly, the team also only recorded one individual of each of the species caught exclusively at the mercury lamp. These were Camptogramma bilineata (yellow shell), Laspeyria flexula (beautiful hook-tip) and Noctua janthina (Langmaid’s yellow underwing).

As seen in the videotaping of the light evening on September 6th, the blue neon light exuded by the Light Trap is extremely far-reaching. This can be seen especially well in the drone footage, where the drone flies very far away from the art object, yet the light is still almost blinding. In his report on the light evening, Timo Zeimet evaluates the insect attracting effect of the Light Trap as very good, since the blue light installation enticed more insect species as the extremely bright mercury vapor lamp did. This is something he had expected anyway, though, because the terrain where the Light Trap was placed is a better habitat for insects than the location where the team placed the vapor lamp. The low overlapping of species was surprising. Additionally, the report says that none of the species they found were threatened, even though Mythimna l-album (L-album wainscot) had been listed as rare in Mecklenburg-Western Pomerania and as endangered in Lower Saxony. But due to the fact that these lists date back to 1997 and 2004, respectively, entomologist Zeimet labels them as outdated. Instead he invokes the list from Schleswig-Holstein from 2007, which declares the L-album wainscot as an area-expanding species instead of a migratory butterfly. Therefore, it is safe to say that this species, too, is not threatened nor endangered.

In order to put these first findings on an empirical foundation, further research would have to be done. Zeimet suggests repeating measurements and censuses over the course of several months, maybe even years. An important detail for these experimental approaches would be to exchange the placements of the Light Trap and the mercury vapor lamp regularly, in order to be able to exclude the influence of other possible factors on the results.

Beginning at dawn on the opening of the Day of the Open Monument, the Light Trap was illuminated until about midnight. Added together, the visitor count on September 11th and September 12th reached around 1,400. In the evening, said visitors were astounded by the luminosity of the art piece and watched while insects were caught, or even took part in catching themselves. Several children brought the plastic inside of old Kinder eggs, which they used to help catch insects. Because the entomologists weren’t able to be present then, Nana Petzet tried classifying the insects based on what she had learnt on the light evening. The evening of September 11th, they sighted the same species as they had on September 6th.

Each species mentioned can be found and researched further by clicking following links (in German): 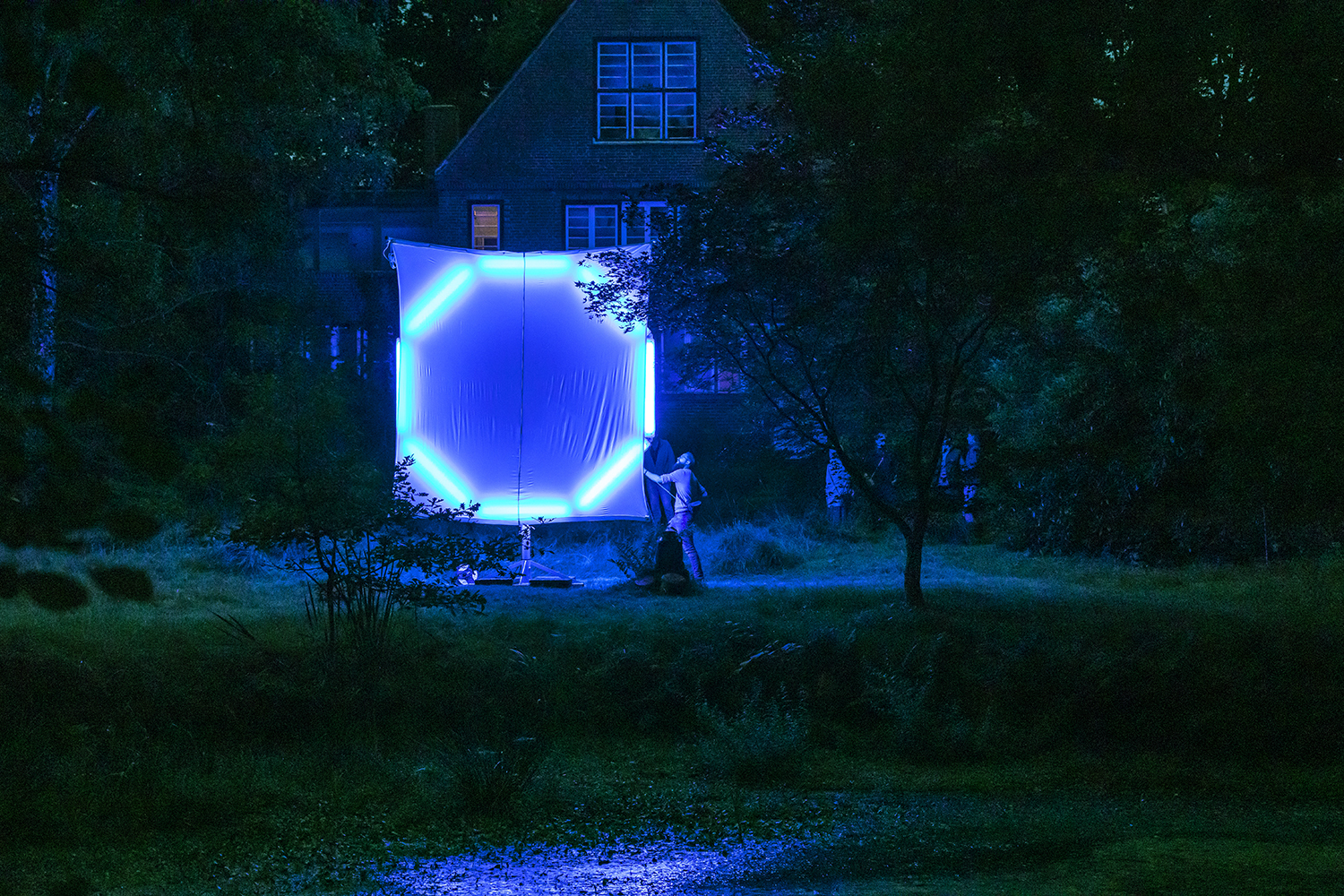 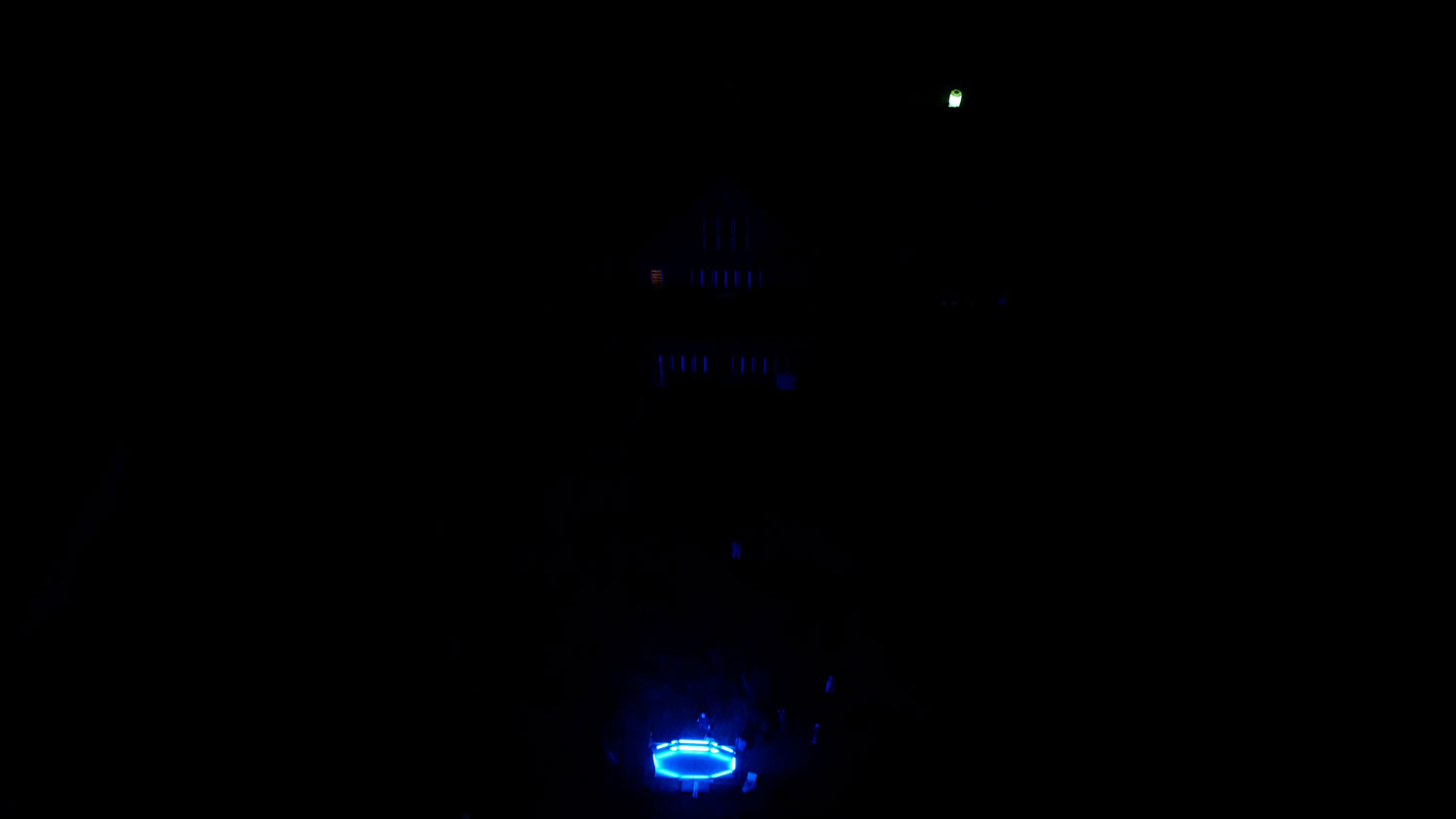 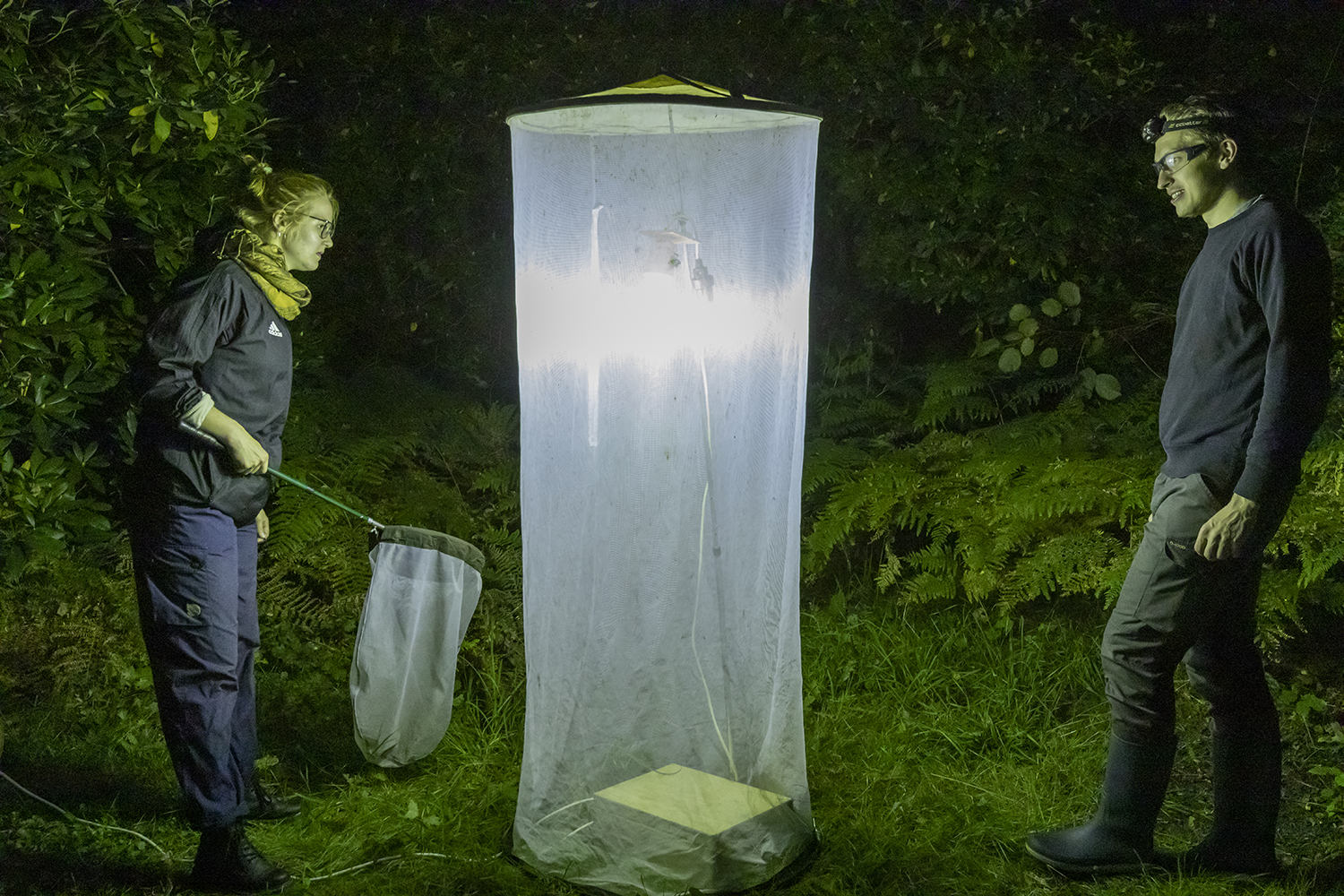 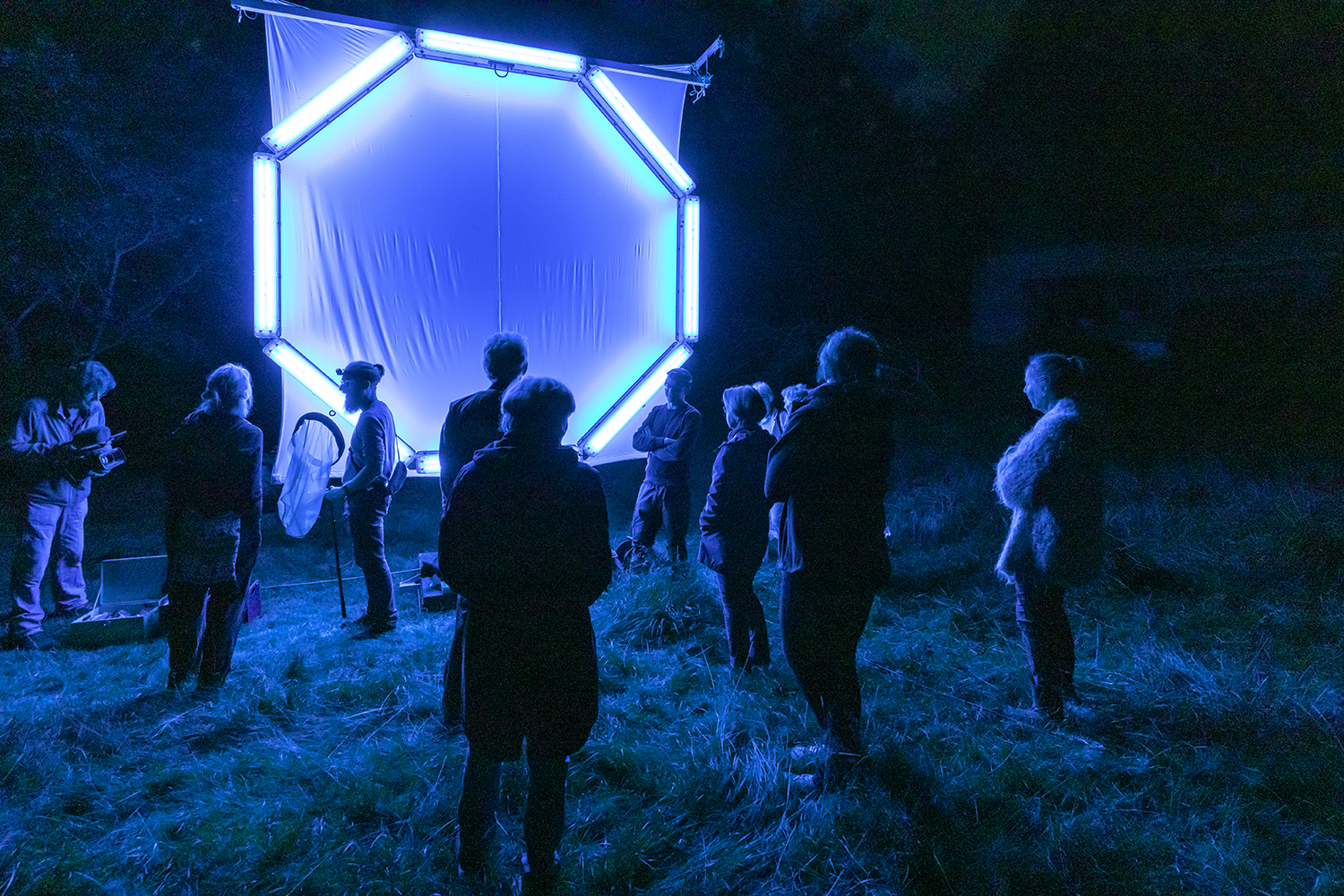 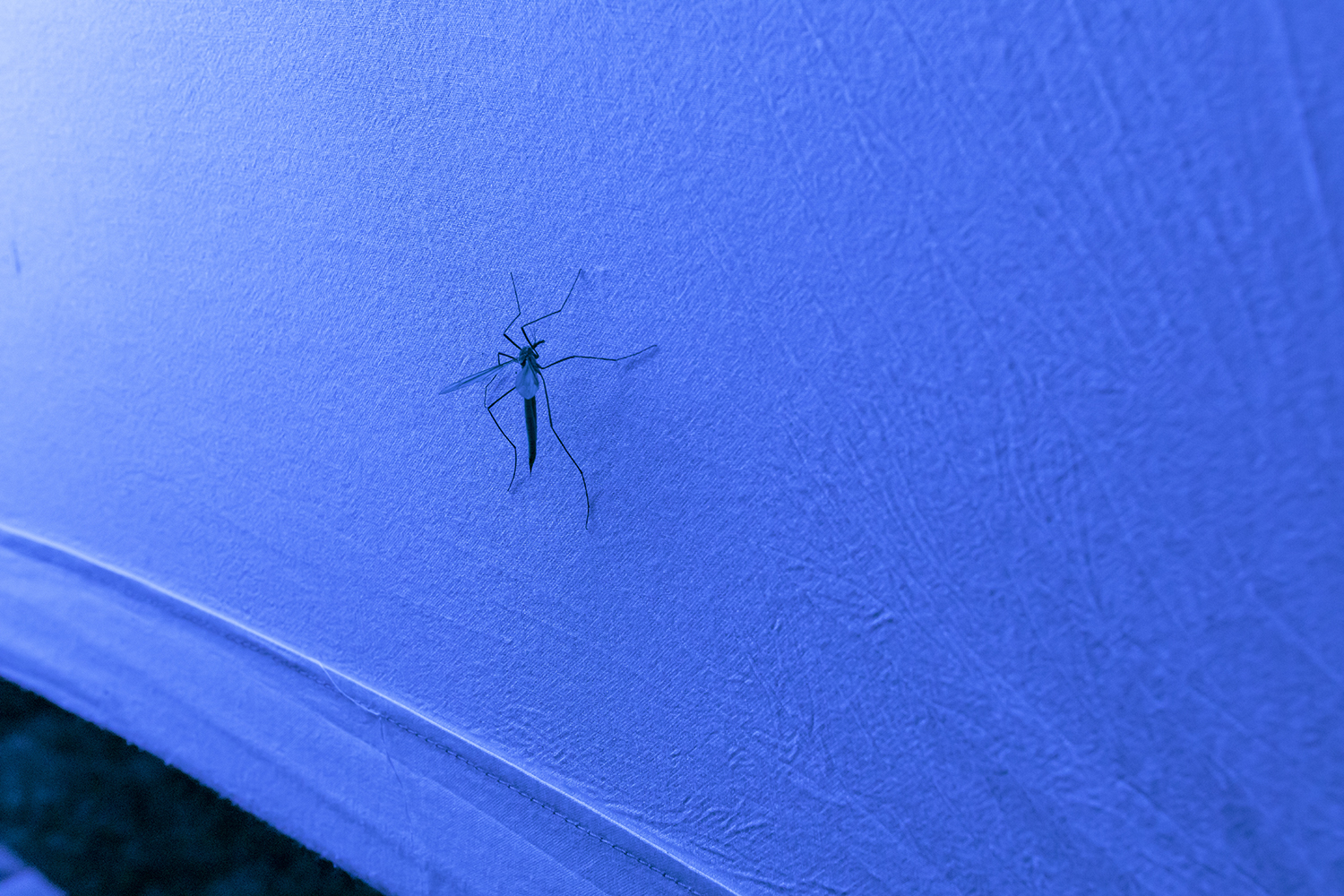 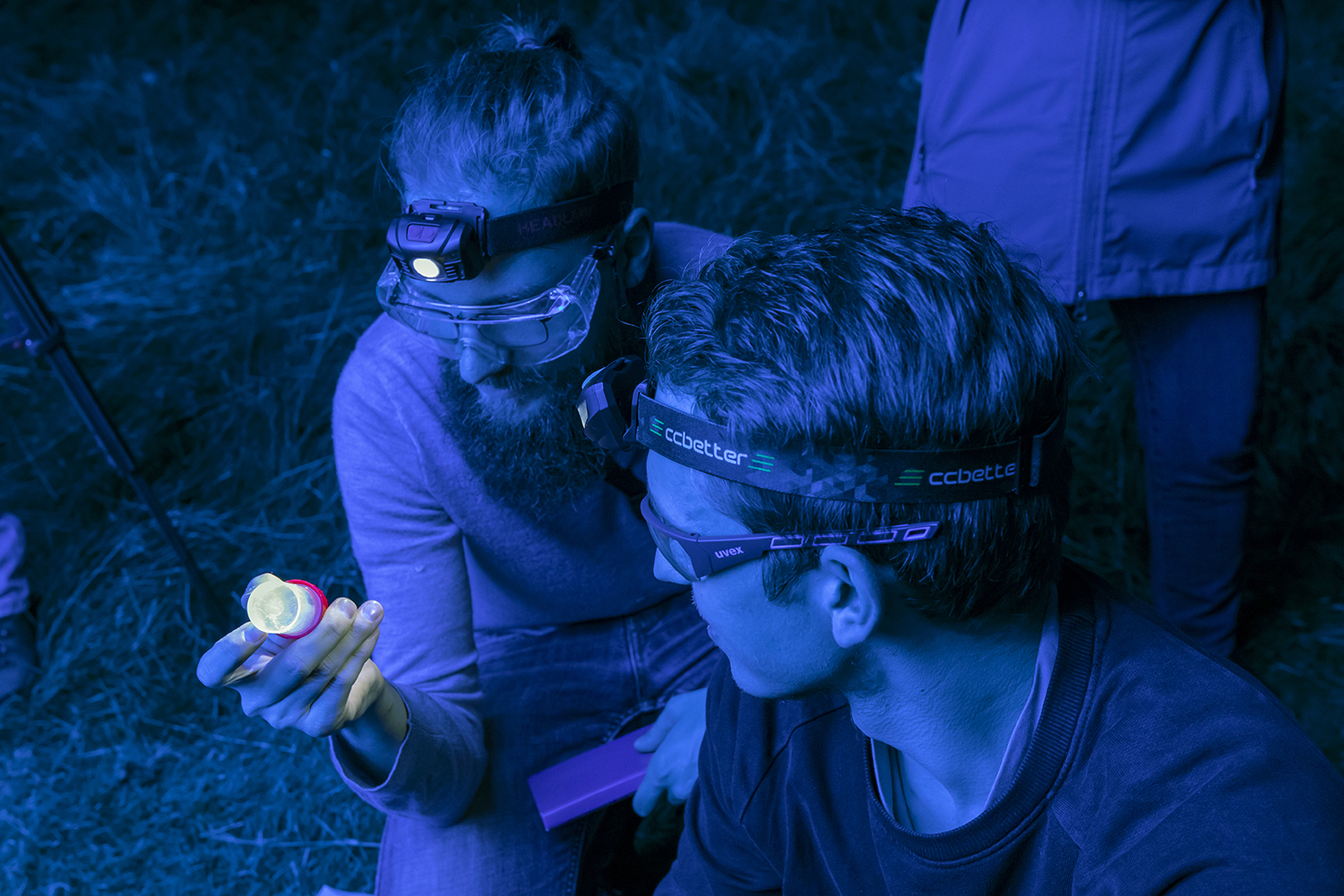